The Epidemiology of CLL in Rural America

Newsletters published on May 9, 2021
Download Transcript
The Epidemiology of CLL in Rural America

What is unusual about the epidemiology of CLL compared with other leukemias?

For starters, I would say that one difference is that exposure to ionizing radiation is an established risk factor for most leukemias. Chronic lymphocytic leukemia (CLL) was considered to be an exception (ie, not radiogenic). For reasons discussed below, that opinion may be changing.

CLL is the most common leukemia in the Western world but is rare in Asia. In fact, it was the lack of an increase in CLL after the atomic bombs were dropped in Japan, when the incidence of many other cancers increased, that contributed to the view that CLL was not radiogenic. We now recognize that CLL is extremely rare among Asians in general, and that the lack of an increase after the atomic bomb blasts may have been misleading.

There is considerable geographic variation in the incidence of CLL within the US (Figure 1)1. For example, for unknown reasons, North Dakota, which is one of the most rural states in the US, has one of the highest rates for CLL; more than 7 cases per 100,000 individuals.

If we were to take a road trip and drive from Fargo, North Dakota to Sioux Falls, South Dakota – a distance of less than 250 miles – the CLL incidence rate drops to about 6 per 100,000. If we continue south to adjacent Nebraska, the rate for CLL drops to 4.6 per 100,000. That represents a 40% change in the incidence of CLL within a day’s drive. 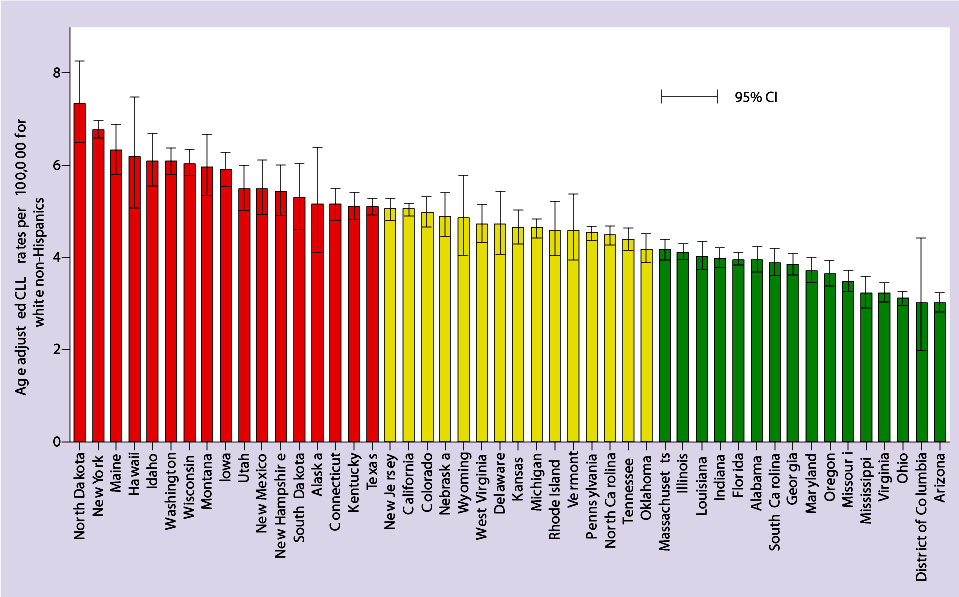 To put those rates in perspective, the incidence rate of CLL in the US overall is about 5 per 100,000. It should be noted that the rates are higher in some populations likely due to ethnicity. For example, there is a higher risk for CLL among Ashkenazi (European) Jews. There are about 2 million Ashkenazi Jews in New York City, so a high rate of CLL in New York is understandable. However, ethnicity does not explain the high rates in states like North Dakota and Maine.

Other than family history, the causes of most cases of CLL are unknown. Adult height and seropositivity for Hepatitis C virus are associated with a small increased risk for CLL.2 Individuals living on or a near a farm have increased risk for CLL, but it is not clear what factors are contributing to this risk. The “road trip” example suggests that there likely are other environmental causes of CLL, but what might those be?

One possible cause may be differences in the prevalence of radon gas. Radon is a form of ionizing radiation that comes from the natural decay of uranium present in rocks and soil. Residential radon is the second leading cause of lung cancer after smoking and is the largest source of ionizing radiation to which most people are exposed. Due to its geologic history, North Dakota has one the highest levels of radon gas in the US as a result of glaciation, when deep earth elements like uranium were brought to the soil surface.

To place radon levels into perspective, the average radon level in homes in the US is about 1.3 picocuries per liter (pCi/L). In Grand Forks, ND, the average is 11.7 pCi/L, which is nearly 3 times the threshold (4 pCi/L) at which the EPA recommends remediation of homes. Radon is a particularly problematic carcinogen because it is colorless, odorless, and tasteless.

My colleagues and I have investigated whether radon levels within individual counties correlate with CLL rates.3 We compiled county-level CLL incidence rates and radon levels in Iowa, North Dakota, Texas, and Wisconsin, where 92%, 86%, 25%, and 4% of counties (respectively) had a mean residential radon level exceeding 4 pCi/L. The age-adjusted CLL incidence rates were significantly positively correlated with mean residential radon levels (P<0.001). Although this evidence is indirect (it is based on counties and not on individuals), together with recent evidence showing an increased risk for CLL among uranium miners and cleanup workers after the Chernobyl disaster, it adds to the growing body of evidence suggesting that ionizing radiation may play a role in the etiology of CLL.

It is important to note that elevated rates of CLL in rural areas are unlikely the result of detection bias. Residents of rural states typically do not utilize medical care as frequently as residents of non-rural states, so detection bias is an unlikely explanation for these rates. In fact, the opposite is likely to be true: CLL may be less likely to be diagnosed in a rural area compared to a non-rural one. So we need to be vigilant in educating rural clinicians in how to identify CLL.

Based on this information, how can physicians from these higher-risk areas identify patients who might have undetected CLL?

Unfortunately, it is not a matter of telling physicians in rural states to look for CLL in all patients from rural environments, because about 90% of the land in rural states like North Dakota is farmland. The increased risk among agriculturalists may be a clue; CLL is theorized to be related to pesticide and high-phosphate fertilizer exposure, which contains uranium (among other carcinogens).

Probably the simplest thing that a primary care physician (PCP) might do to identify undetected CLL is to make sure to take a complete blood count. This is because most CLL is diagnosed “incidentally” when the results of a blood count ordered for other reasons (eg, an annual physical exam) show a highly elevated white blood cell count (WBC).

Non-expert physicians, such as PCPs, can make a presumptive diagnosis of CLL based simply on an elevated WBC. Typically, this means absolute lymphocytosis, with more than 5,000 B-lymphocytes per microliter.4 However, the average PCP may not have access to the flow cytometry necessary to identify specific markers of CLL. To diagnose CLL, clonality must be confirmed by flow cytometry. This can identify the presence of a cytopenia caused by clonal bone marrow involvement, which establishes a diagnosis of CLL regardless of peripheral B-lymphocyte count.4

Fortunately, advances in genetics are allowing us to identify who has aggressive disease that is likely to advance rapidly, and who has disease with a relatively good prognosis. Access to expert hematologists-oncologists would allow for these types of disease characterizations, which would undoubtedly improve the quality of care for these individuals

Given these challenges, is epidemiology data for CLL necessarily accurate? Are patients with CLL being identified and treated?

There are two types of epidemiologic data that are routinely collected: incidence data (new cases), and mortality data (from death certificates). In diseases like CLL, mortality data will not be as helpful, as most patients with CLL will not die of their leukemia. Unlike some cancers, (eg, pancreatic cancer, where the incidence rate is virtually the same as the mortality rate), the case fatality rate for CLL is significantly lower. Moreover, the average age at diagnosis of CLL is in the 70s, and in the absence of CLL, the average male lifespan is less than a decade longer than this.

In the context of correctly identifying cases, incidence data is the relevant data. This is one reason the high rates of CLL in rural areas are so surprising. The fact that the rate of CLL is so high in rural areas—where access to medical care and to medical specialists is low – means that the actual burden of CLL is likely much higher due to the presence of undiagnosed disease.

What final take-home message do you have for clinicians reading this newsletter?

We used to think that CLL was unlike other leukemias in that it is not caused by radiation. We know that therapeutic radiation does not increase the risk for CLL (although it does increase the risk for other cancers, like brain cancer, due to the scattering effects of radiation). However, we are just beginning to explore the impact of other forms of ionizing radiation on CLL. Based on more recent occupational exposure data, combined with the data from North Dakota and other similar states, it is looking more and more like environmental radiation plays a role in CLL.5 When this is paired with a silent symptomology and a lack of access to specialists in rural areas, it is likely that more can be done to identify and optimally manage CLL patients in these high-risk locations.

Provided by MediCom Worldwide, Inc.
This activity is supported by educational grants from AbbVie, Genentech, and Pharmacyclics.